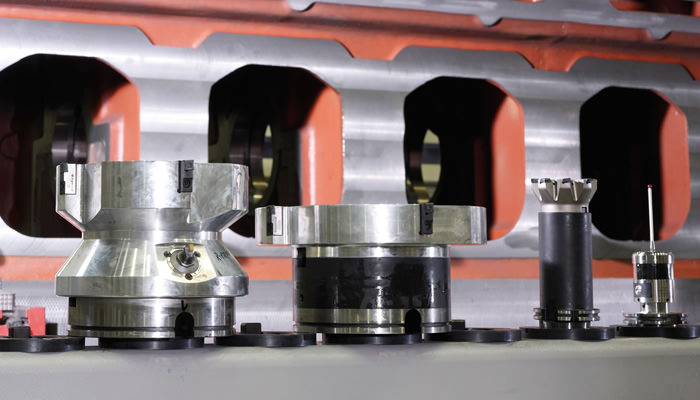 Only a few years after re-designing the series WaldrichSiegen now can provide references for the ProfiMill within all important industries – the machine tool industry, power engineering industry, engine manufacturing industry and general machine construction industry.

One example is Jinan Diesel Engine Co. Ltd. They rely on WaldrichSiegen and the ProfiMill when machining gas engines. Two ProfiMills are going to be installed at JDEC in late summer of 2013. The order does not only include the delivery of two machines and the corresponding tools and clamping devices. It also included the development of the complete machining process, methods and programs.

Since the machining of engine blocks often includes areas which are difficult to access, the machine was equipped with extensive special components promoting machine efficiency – eight milling heads are smoothly interchanged by fully automated aggregate changers. An automatic tool changer with space for 192 tools was also integrated.

In order to minimize the commissioning time at the JDEC site, the machine underwent preliminary acceptance tests at the WaldrichSiegen production site in Burbach/ Germany during the winter 2012/2013. After checking production quality and accuracies, two MAN 32 V-engines and two engine cases by JDEC were machined. Complying with all accuracy requirements, the ProfiMill will be a new center piece for production at JDEC and continue to produce work pieces with the highest quality in the most efficient manner. All the pre-acceptance tests contractually agreed were passed meeting the customer's full satisfaction. A training course for the JDEC employees took place at the same time as the preliminary acceptance tests.

Thus, the company can promptly begin with the production of high-quality engine cases after the commissioning of the ProfiMill.