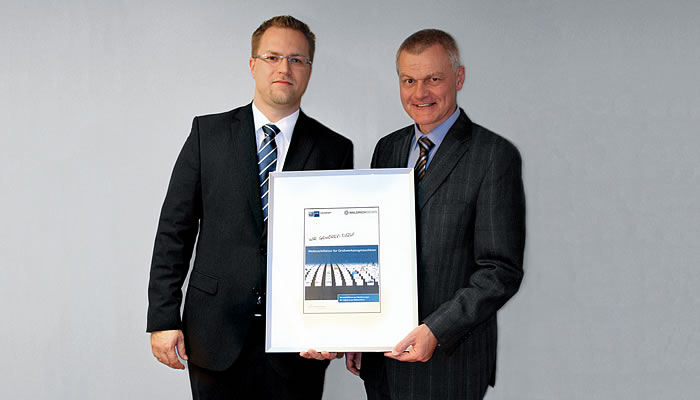 The Chamber of Industry and Commerce’s (IHK) register of world market leaders in the region of southern Westphalia has gained a new entry. Klaus Gräbener, General Manager of IHK Siegen, ceremonially handed over the certificate to Marco Tannert, President of WaldrichSiegen. Marco Tannert is proud that WaldrichSiegen is one of the flagships in a region that is itself characterized by exceptional economic strength.

“We are very pleased with this award and with being included in the IHK register of world leaders. We are established as a pioneering brand and this certificate underlines our strong market position,” Marco Tannert says. The engineer is new president in the Burbach headquarters since October 2015.

The register of world market leaders features a large number of owner-managed, medium-sized companies such as WaldrichSiegen that look back on a long and successful history. In September 2015, the company celebrated its 175th anniversary. Founded in 1840 as a small smithy, it developed into a world market leader and guarantor of precision and performance in the manufacture of heavy-duty machine tools in the areas milling, turning, grinding and texturing. „There are many companies with a history as long as that of WaldrichSiegen, but few companies stand for a whole region and are seen as a symbol of its economy. WaldrichSiegen is such a company,” Klaus Gräbener said in his speech during the 175th company anniversary celebration.