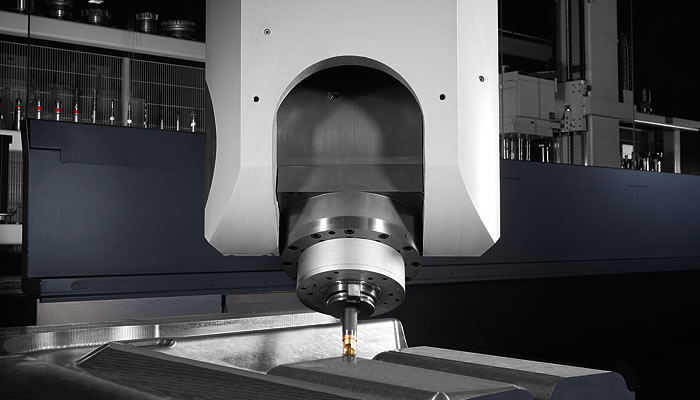 New C-axis for 5-axis machining for the ProfiMill series 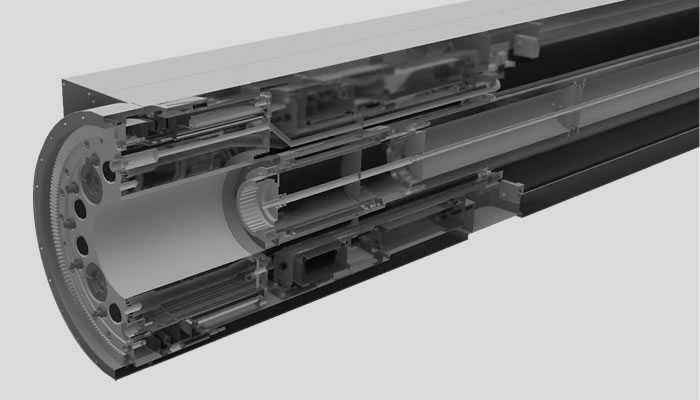 Continuously rotating C-axis in the ram

Most manufacturers of portal milling machines have to admit defeat when it comes to 5-axis machining in high torque ranges. "Very few manufacturers are capable of providing this application at high torques. Yet, demanding machining tasks, such as free form surfaces, can only be solved this way," says Ralf Tschersche, Manager of Mechanical Engineering. This, however, is not the case at WaldrichSiegen: "Last year, we have developed two portal mills which allow for 5-axis machining with a milling power of 80 kW at the Tool Center Point. Machines with a milling power of up to 120 kW are also available." The key: a continuously rotating C-axis.

The major innovative step was successfully realized in cooperation with the experienced manufacturer of special gearboxes RSGetriebe, also a HerkulesGroup company. The design and manufacturing departments cooperated closely to create a driving unit for the C-axis in the ram that is specifically tailored to the requirements of the customer and the ProfiMill series. "The particular challenge in creating such a drive series, which has to be backlash-free and dynamic on the one hand and thermostable on the other, is the compact design. The drive must be integrated into the existing ram geometry and allow for a torque of 7,500 Nm at the same time," Ralf Tschersche explains. Until now, a C-axis with Hirth serration was commonly used, which only covered the rotation degrees of a Hirth serration. In contrast, the continuous C-axis allows for rotation of nx360°. The advantage: from now on, a milling head just requires a B-axis or A-axis to be capable of 5-axis milling.

Two portal milling machines of the ProfiMill series in gantry and table design have been developed and designed for 5-axis machining in high-performance ranges by WaldrichSiegen and RSGetriebe and have been in operation since 2015 with great success. The machines serve in the aviation parts supply industry. They have a main drive of 80 kW and a maximum torque of 7,000 Nm at the Tool Center Point, as well as a C-axis with 5,000 Nm. "To be able to instantly meet similar demands in the future as well, we have developed a modular set with the new drive technology," says President Marco Tannert. "The result: C-axis drives in different performance ranges, ideally tailored to the individual field of application."

In 2013, the ProfiMill series was expanded to include smaller construction sizes. With a width of 2 to 4 meters between the columns and a milling force of 50 / 65kW, they specialize in economic 5-side machining of mediumsized workpieces. 5-axis machining with up to 7,500 Nm taps into an additional, highly demanding field of application for this series.

Performance range of the C-axis